William Shumway, a young, idealistic cellular biologist with a brilliant new idea for curing cancer, is recruited from a relative obscurity to Hill-Matheson, a major cancer research institute, by its charismatic director, Bob Brock, with the offer of his own lab and all the resources he will need to pursue that idea.  As the pressure to show publishable results begins to build, fueled by unexpected competition from a rival lab at Oxford and the politically agile head of another department who has resentfully seen his own budget slashed to free up more funding for Shumway's lab, his research suddenly hits a snag.  He is faced with having to choose between full disclosure of the problem, which would jeopardize the funding he needs, and making the more expedient decision to bend the rules just a little, which will buy him enough additional time to solve the problem.

'… taut, twist-filled and appealingly cynical drama … Not since “Copenhagen” has a playwright so dramatically portrayed the culture of high-stakes science … for all its theatrical bravado, “Secret Order” doesn’t give short shrift to science, which is not only elegantly woven into the themes of the play but also helps establish the credibility of his dramatic world. - New York Times:

'The other attraction of this play is Clyman's magnificent use of the English language. In his capable hands, lengthy speeches about how cells attack each other become epic dramas and renegade cells are turned into a moral issue. At times Clyman's prose sounds a little like science fiction at its very best. At other times, it has the cutting subtlety of a work by an expert dramatist … Clyman also has a definite flair for biting humor … Despite the precise language, Secret Order is filled with ambiguity …Clyman has the humility and perception to let the audience make up its own mind … just one of his many virtues.' - CurtainUp: click for full review

'… a smart and thought-provoking script … a taut, stimulating drama about the moral and ethical dilemmas involved in the high stakes world of medical research. - nytheatre.com review
click for full review

‘The playwright tackles some provocative territory with style and wit while crafting a timely tale about cancer research… the thought provoking play demonstrates Mr. Clyman is a playwright of considerable merit and much talent. Secret Order is a stimulating reminder of the power of theater.’ - Dan’s Papers

‘Perceptive and knowing … ingenious plotting and dialogue … a gripping medical drama … takes an endlessly fascinating issue – the ongoing search for a cancer cure – and brilliiantly uses it as a MacGuffin to propel his twisting, turning drama forward.' - Times Square

'… a smart, tightly constructed and surprisingly humorous play … As a playwright, Clyman seldom puts a foot wrong. The plotting is tight and involving. The dialogue is smart, punchy, full of meaningful observation and wry humor. It always sounds right — true to the characters he is developing.' – The Houston Chronicle click for full review

‘Spotlight on  … Snappy Dialogue Speaks to Audience in Secret Order … Bob Clyman has filled Secret Order with the sort of snappy talk that makes you think: a) I wish I could express myself so felicitously; and b) I’m glad I’m at the theater tonight.’ –feature article in The Houston Chronicle click for full article

'All four of the characters shape a terrifically tight plot ... a high-stakes world that will keep you on the edge of your seat.  — The Houston Press click for full review

‘… immediately plunges us into the story and never relents.’ – Backstage West

'… a burst of heady theatrical pleasure, courtesy of playwright Bob Clyman and his drama "Secret Order" … brainy, taut and psychologically complex …Clyman crafts the dialogue so subtly - - that it's impossible to label anyone as good or bad, honest or dishonest. They're both.' - St. Louis Post-Dispatch click for full review

'... filled with keen observations on the ways in which ambitious people can deceive themselves and others without ever consciously intending to do so ... a deep understanding here of the malleability of human memory … All this is wrapped up in dialog that sizzles with intelligence and energy.  … an enthralling and timely seriocomic examination of the conflict between the objective discipline of science and the subjective world of the minds that practice it. …  belongs on the "must see" list of anyone looking for an evening at the theatre that will give them plenty to discuss over drinks afterwards and ponder for some time after that.' - KDHX
click for full review 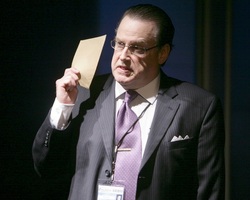 '… theatre of the highest order … a first-rate work of substance that is not afraid to turn over some pretty big rocks and examine what lies beneath … doesn’t let go until the last word is spoken … the dialogue is crisp and clear.' - Broadwayworld.com
click for full review

‘… sparkles with sophisticated wit and life … It’s a rare experience to see a play that’s so sophisticated, deals with profound issues, and yet is humorous and thoroughly engaging all at the same time …’ - Metro North

‘… a smart play about such big ideas as ethics, power and ambition … a fascinating medical drama … not only gripping as a story, but includes funny and heartfelt moments … This play does what many great plays do.  It makes you think.’  - The Metro North 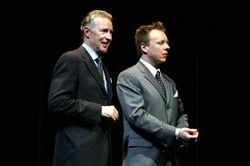 Geoff Pierson and Davis Duffield
‘… a smart play about such big ideas as ethics, power and ambition … a fascinating medical drama … not only gripping as a story, but includes funny and heartfelt moments … This play does what many great plays do.  It makes you think.’  - The Eagle-Tribune

‘Clyman mines the material to create a taut, crisp and appealingly cynical drama that explores moral ambiguity …  has wit and insight … his ability to present big ideas wrapped in entertaining dialogue makes for a good night of theatre.’ - The Mercury News
click for full review 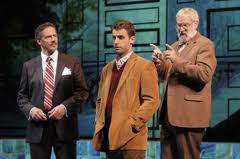 ‘ … rich with dramatic irony and well crafted dialogue: lines you can only wish you could have thought of or remembered for future use at the punchbowl.’ – San Francisco Baby Area Theatre Critics Circle

‘If you want drama so real it feels as if you are eavesdropping on people you know and have seen too many times before, don’t miss this amazing production now playing at San Jose Repertory Theatre.  … a modern moral drama perfectly crafted … The veracity of this dialogue is unmistakable.  There is not an artificial phrase, a false sequence in the speech of every character.   … The audience is right there feeling the push of ambition, the heady excitement of discovery, and terrible loss that failure might bring …’  Lynnruthmiller.net

' ... In Bob Clyman's arresting play, medical research is more than a full-contact sport; it's a Darwinian struggle for survival ... '
- Ithica Journal

‘… witty, fast-paced and incisive … every word is a potential minefield … Clyman’s script crackles with humor and intelligence.
-The Buffalo News click for full review

‘… a very interesting and entertaining play that makes you feel like you are right in the lab with the scientists.  I highly recommend seeing it!’ – Downtown Phoenix Journal