Where do you draw the line between eugenics and the desire of every parent to give his or her child the best possible start?  If the answer seems pretty simple, just ask Gwen, Allie and Tom, three parents whose children were conceived at a prestigious donor insemination program, specializing in donors with IQ’s over 180.  It is now five years later, and the parents of these exceptional children are discovering that the answer is anything but simple.

'How far would parents go to help their child get ahead? How do they know they’re making the right choices? The Merrimack’s production of Clyman’s “The Exceptionals’’ creates excitement and suspense around the most basic parenting questions ...  What makes this play “exceptional’’ is Clyman’s ability to create a fairly humorous setup, and then ratchet up the tension to transform a simple story into a high-stakes drama ...  taut writing, which plays into assumptions even as he overturns them.- Boston Globe click for full review 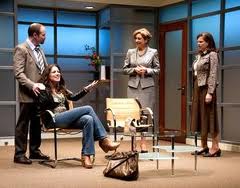 'Clyman’s brilliance is that he doesn’t use a soapbox to pound his point home. He puts great trust in his script’s subtlety, and he banks on the audience’s intelligence to get the message ... Clyman employs much humor and creates a handful of very human characters ... a highly successful, intelligent and chilling play. - The Nashua Telegraph

'… an incisive, witty and above all heartfelt dissection … all the characters are fully realized.' - The Lowell Sun

'A sparsely appointed waiting room is about to become the scene of an emotional showdown.  Make that many emotional showdowns. So sit tight – there’s no gun-slinging, but plenty of action ... playing on the social premium placed on molding the perfect son or daughter … With the lightest of touches, “The Exceptionals” takes apart this obsession ...' The Taunton Gazette

'… could not be timelier … it feels like watching the events live…you know these people.  The impossible relationship between the very different moms, thrown together by circumstances, is first funny, sometimes jarring, and finally touching  … the results are truly exceptional.' - Billerica Townie News

'Employing scientific jargon that does not confound and consistently crisp dialogue laced with bracing humor, he examines the issue of raising exceptional children and influences us to consider our own ethical boundaries when it comes to making choices for the education and socialization of our offspring. - Broadway World

'particularly eloquent ... This disturbing picture notwithstanding, THE EXCEPTIONALS abounds in comic moments' -The Washington Post

'The subject matter, sharp dialogue and subtleties of plot should appeal to other directors and producers looking for thought-provoking theater that entertains.' - Broadway World

'The humor help the viewer to get sucked into the excitement and the suspense' ... the production 'allows the script to shine.' - DC Metro Theater Arts

'... the moral dilemma is never overt but couched in sophisticated psychological data that make sense within a fantastical paradigm.  This is the tension in the play and also the fine craft - clever logic as stepping stone for the humor.' - Danmurano.com 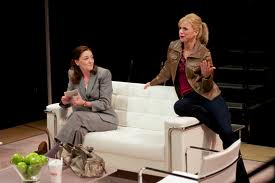