When Annie and Bob move with their two children from the city to the suburbs, Bob, an adoring husband with a perpetually sunny disposition who teaches philosophy is quick to point out all the positives of the move, whereas Annie, a dedicated, socially activist  attorney for the poor, worries about the moral implications.  However, immediately after the enigmatic Monsignor Calibar of the Unity Church stops by to welcome them to the neighborhood, Annie starts spouting trickle down economics, trades in the Subaru for an SUV, and takes off on day-long shopping sprees.  When Annie vanishes one day, Bob, hardly a man of action but emboldened by his love, begins a valiant search that takes him deep into the dark, post-modern underbelly of the New Jersey suburbs, where he encounters the elusive Hitchhiker, three cops named Halihan, Hoolihan, and Moynahan, and the FBI agents known as Figure and Ground, before finally arriving in the "Valley," a utopia in the North Jersey hills.

' ... stands apart as one of the wackiest and funniest stage comedies I’ve seen in a long time.' Curtain Up

'Take a playwright with the smarts and pedigree of Bob Clyman, stir in some off the wall allusions to a weird and structured world, mix with a little psychobabble, and you’ve got one hilarious play.' – Independent Press

'… that rarest of stage species – a literate satire, bordering on melodrama, that is actually howlingly funny.  Playwright Bob Clyman juggles politics, religion, economics and whatever else dares to show up, adds a dash of fantasy and then for a full two hours urges audiences to fall under a magical spell of sophisticated belief.'  – Time Off

'In snappy, witty dialogue, Clyman’s wicked pen skewers a wide variety of modern concerns … some of the ideas come so fast and furiously that your head will spin, but plenty of opportunities arise for belly laughs and chuckles alike.' – Out & About 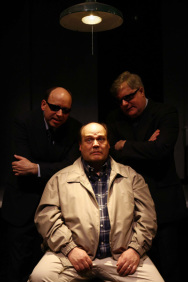